The Industrial Revolution was the transition to new manufacturing processes which occurred from the 18th to 19th centuries  – roughly in the period from about 1760 to sometime between 1840 – and was a period during which predominantly agrarian societies in both Europe and the United States of America became industrial.

A popular musical depiction of how the Industrial Revolution affected the United States of America can be seen in the first musical written by the team of Richard Rodgers and Oscar Hammerstein II. The musical, Oklahoma! (see fig.1), is based on Lynn Riggs’ 1931 play Green Grow the Lilacs andis set in the Oklahoma Territory, one of the last places to be influenced by the Industrial Revolution.

Indeed, industrialization brought about an increased volume and variety of manufactured goods and an improved standard of living, and through 1821 the spread of the Gutenberg Press eventually gave way to the industrial printing press in the 1800s. Accordingly, the design and printing fields were affected by industrialization, and similar to the partnership formed by the farmer and the cowman in the musical Oklahoma!,so too did typography and color dynamically partner during the Industrial Revolution to give rise to Chromolithography in 1837.

Before the nineteenth century “printed material was predominantly religious, educational, and fictitious in nature” (Fraser). Very little graphic innovation took place before the end of the eighteenth century compared to the Industrial Revolution. Printing became mechanized which greatly increased production. The camera was able to visually record events, and chromolithography foreshadowed the modern four-color press.

Johann Alois Senefelder (see fig. 2) was a German actor and playwright who invented the printing technique of lithography in 1796. 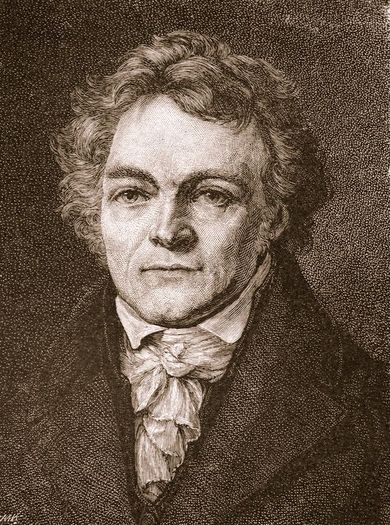 When Senefelder had problems printing his play Mathilde von Altenstein which caused him to fall into debt, he was unable to afford to publish a new play he had written. Senefelder then experimented with a novel etching technique using a greasy, acid resistant ink as a resist on a smooth fine-grained stone of limestone. He discovered that this could be extended to allow printing from the flat surface of the stone alone, the first planographic process in printing.

Furthermore, Senefelder introduced the subject of colored lithography in his 1818 A Complete Course of Lithography, wherein he told of his plans to print using color someday; however, Godefroy Engelmann was awarded a patent for chromolithography on July 1837 (and not Senefelder), even though chromolithography was already in use before this date, and can be seen in the production of colored playing cards that combined color and typography (see fig. 3).

Limestone and zinc were two commonly used materials in the production of chromolithographs, and the process of chromolithography was chemical because an image was applied to a stone or zinc plate with a grease-based crayon (Seeing is Believing). After the image was drawn onto stone, the stone was gummed with gum arabic solution and weak nitric acid, then inked with oil-based paints, and passed through a printing press along with a sheet of paper to transfer the image to the paper.

Colors were added to the print or type by drawing the area to receive the color on a different stone, and printing the new color onto the paper. Each color in the image was separately drawn onto a new stone or plate and applied to the paper one at a time. Each sheet of paper would therefore pass through the printing press as many times as there were colors in the final print, and in order that each color was placed in the right position for each typographic element, each stone or plate was precisely lined up with the paper using register marks.

Hugh M. Clay had worked in lithography shops for ten years before going into partnership with Herman Cosack in 1864 to form Clay, Cosack & Company. They printed a variety of lithographic products, which included trade cards by 1870. Clay left the firm to start a new partnership with Henry A. Richmond in 1879 to concentrate on printing chromolithographic trade cards and labels. When Clay retired in 1886, Clay & Richmond of Buffalo, New York became the Richmond Lithographing Company. In 1896 the firm’s name was changed to the Niagara Lithograph Company after it was purchased by Hugo R. Monro, John J. McWillams (who served as president), and his son-in-law Horace Reed. After McWilliams death in 1912, Reed took over the company.

In conclusion, the Industrial Revolution was pivotal in the merger of typography and color through Chromolithography, allowed automations to make printing become mechanized, which greatly increased company’s production. This paved the way for future advancements with both typography and color, and ultimately furthered the field of graphic design.