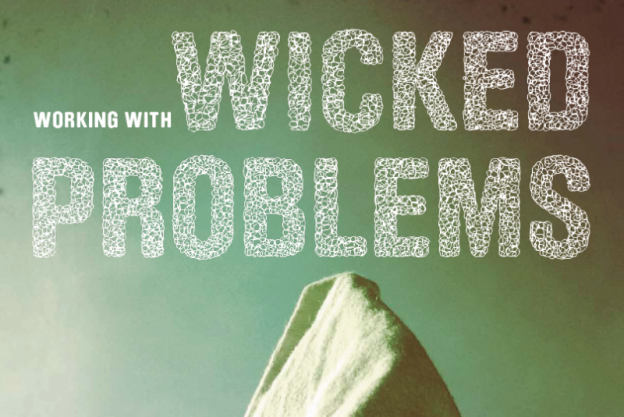 My stance on Fourth Order Design principles parallels Richard Buchanan’s perspective on knowledge, art and design in Wicked Problems in Design Thinking, wherein Buchanan states that “knowledge is achieved by a new kind of art directed toward orders of change” (Buchanan). The current state of affairs with design and visual communication is primarily concerned with the creation of logos, symbols and things (and not ‘knowledge’), which according to Buchanan’s definition of design orders, primarily exist only in the First and Second Order Design.

When one looks at the field of commercial design and in general at the visual communication, one can see that there is an emphasis placed on experiential knowledge – which is directly measurable, employable and is thus worthy of reward – but not theoretical knowledge and analytical thinking. In Lorraine Wild’s essay The Macrame of Resistance, Wild refers to this concept in the field of design more so as the concept of ‘craft’, and that design is currently “aimed at mass production” (Wild). Wild further states that design is separated into two different types of knowledge: theoretical knowledge and knowledge gained only through experience.

This emphasis on knowledge gained only through experience is not an entirely unique problem, but rather is most apparent in the field of design through D.I.Y. (do it yourself) designers, and that a lot of employers are looking for software users, rather than designers with design theory and analytical thinking ‘under their belt’. So, I agree with Buchannon’s design principles of Fourth Order Design in that there needs to be a “significance of seeking a scientific basis for design,” and that this ‘significance’ lies in “a concern to connect and integrate useful knowledge from the arts and sciences alike, but in ways that are suited to the problems and purposes of the present” (Buchanan).

Furthermore, I would encourage an added emphasis on design thinking not only for designers, but also for those that employ designers. The design industry is ever-changing, we now exist in a ‘prosumer’ market, and it necessary for both designers and employer to start looking at “the problems of everyday experience,” which is “evident in the development of diverse new products which incorporate knowledge from many fields of specialized inquiry” (Buchanan).

To revisit a previous discussion (GRDS 504: Unit 6), I have already encountered Fourth Order Design in my work at the Robert C. Byrd Health Sciences Center Information Technology Services (ITS) at West Virginia University, and if ITS didn’t employ Fourth Order Design principles we would be primarily concerned with only the First and Second Order of Design, and we would be building custom builds and designs that really don’t benefit or enhance the people and system in which we work.

As I also stated in a previous discussion, ITS creates First Order Design websites for affiliates, departments, and schools, and this is text-book First Order Design because we are just creating a symbolic and visual communication designs that exist in Adobe Fireworks and Photoshop (as a design only). ITS then turns those designs into Second Order Design products by converting them into .NET templates for the Kentico, Slate, and WordPress content management systems – so it is an actual product that is utilized by affiliates, departments, and schools (and the clients can choose the templates).

Now, let’s consider the Third and Fourth order of Design, and that Buchanan stated “on one hand, such an art will enable individuals to participate more directly in this framework and contribute to its development. On the other, professional designers could be regarded as masters in its exploration” (Buchanan). Considering this, ITS  also develops documentation, training, and provides ‘activity and service’ support for those products to end users – administrative assistants, web developers, and staff – and ITS demonstrates the product as a prototype, and ‘describes the process in a way that makes it transferable to the client’; this is very much the definition of Third Order Design. And, over years of usage, the clients communicate with ITS and we pursue the realization of purpose and context around the templates, ever-changing our ‘product’ from a systemic approach. This identifies requirements, data, and functionality that we didn’t even know existed, and helps ITS pursue coherence and integration around the task of affiliates, departments and schools communicating via the Internet.

If one agrees with Tony Golby-Smith’s definition of Fourth Order Design as being design that “pursues the realization of purpose and context around a task. But it also pursues coherence and integration around a task” (Golsby-Smith), than this conversation and process re-engineering ultimately effects the system as a whole, changes ITS’ work and learning environment, is Fourth Order Design.

I think that of those designers and design employers who are aware of Fourth Order Design, they would probably state that it is absolutely necessary to promote Fourth Order Design. They might also agree that a lot of the world’s ‘Wicked Problems’ would never be addressed without this intermingling of disciplines and exploration, and without the collaborative approach that is necessary – considering Buchanon’s definition of a Wicked Problem as a “class of social system problems which are ill-formulated, where the information is confusing, where there are many clients and decision makers with conflicting values, and where the ramifications in the whole system are thoroughly confusing” (Buchanon) – it would be impossible to tackle global, economic, culturally and systemic problems.

Likewise, for those designers and design employers that aren’t aware of the orders of design, cost, efficiency, turnaround, and client approval are still of the utmost importance; however, the focus is misplaced on their part to looking at design only from the perspective of making visual solutions and physical products that meet immediate needs (and therefore net profit and customer satisfaction). I’m not stating that these aren’t valid concerns, but this perspective from a First and Second Order Design-only perspective will never be able to tackle ‘Wicked Problems’, and therefore attempt to design large scale solutions. What ultimately occurs as a result is the perpetuation of designers just being software users, the lowering of employment opportunities and wages due to D.I.Y. designers, and a focus only on the immediate, without a concern for community, public, and environmental concerns.

Since my stance on Fourth Order Design principles parallels Richard Buchanan and Tony Golsby-Smith’s definition, knowledge and perspective of design orders – and that I do feel that the design is currently and primarily concerned with only the First and Second Order of Design – I believe that there needs to be an addition of ‘significance’ in seeking a basis for design, that designers and design employers need to be concerned  with interconnecting fields (of knowledge and sciences), and that design ultimately needs to be “suited to the problems and purposes of the present” (Buchanan).